Gauging the Threat: Story of a shark population

One of the first things I ever learned about white sharks, was that when you see one, you take a picture of their fin. Researchers have been using this technique to recognise individuals since the late ’80s [1], and the set up with Marine Dynamics was no different. Whenever we could, we took photos of the fins of the sharks we saw. But putting those pictures into the context of what they meant for sharks in Gansbaai and the greater population of sharks in the region took a lot more time, thought and effort to get off the ground. 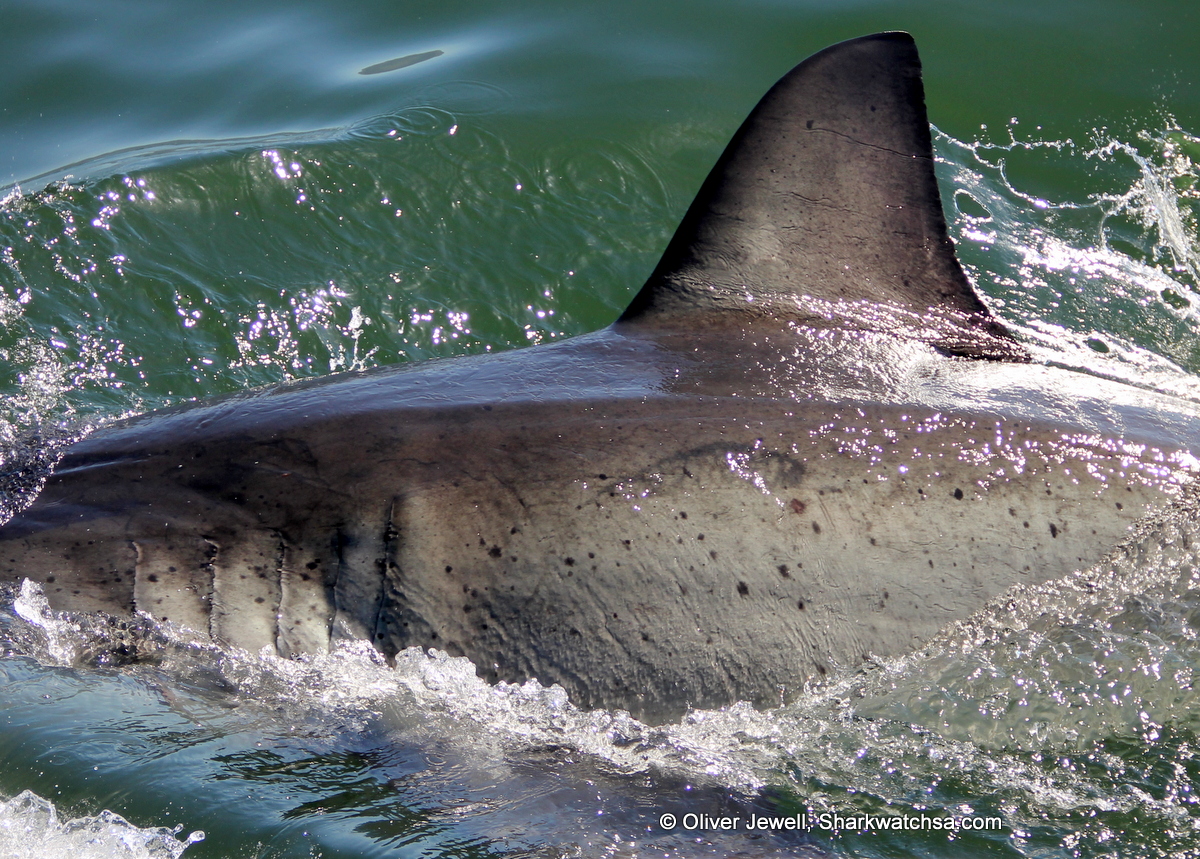 One of my favourite white sharks, Woundy, giving an excellent example of the fin shape and markings we were looking for.

Getting the ball rolling

When I first joined Marine Dynamics in 2007, my first role was to digitise our data. This was fine for the environmental data we were collecting [2], yet way more tricky with the fin ID’s. When I re-joined the team in 2009, Alison Towner and I began to think about how to do this, but with our Master’s research coming up tagging and tracking sharks in the bay, as well as daily trips to guide, it became hard to keep on top of things.

When Michelle Wcisel joined the team the following year from a dolphin research project, she brought with her some skills in cataloguing photo ID’s and working with some semi-automated fin matching software.

Finally, we were getting somewhere with our catalogue, and we just needed someone with a keen eye for details, a love of sharks and an unstoppable drive that could be fuelled purely on cheesy garlic bread, and this is when Ed joined our research team! You can learn more about how our team worked through this process in the video below. 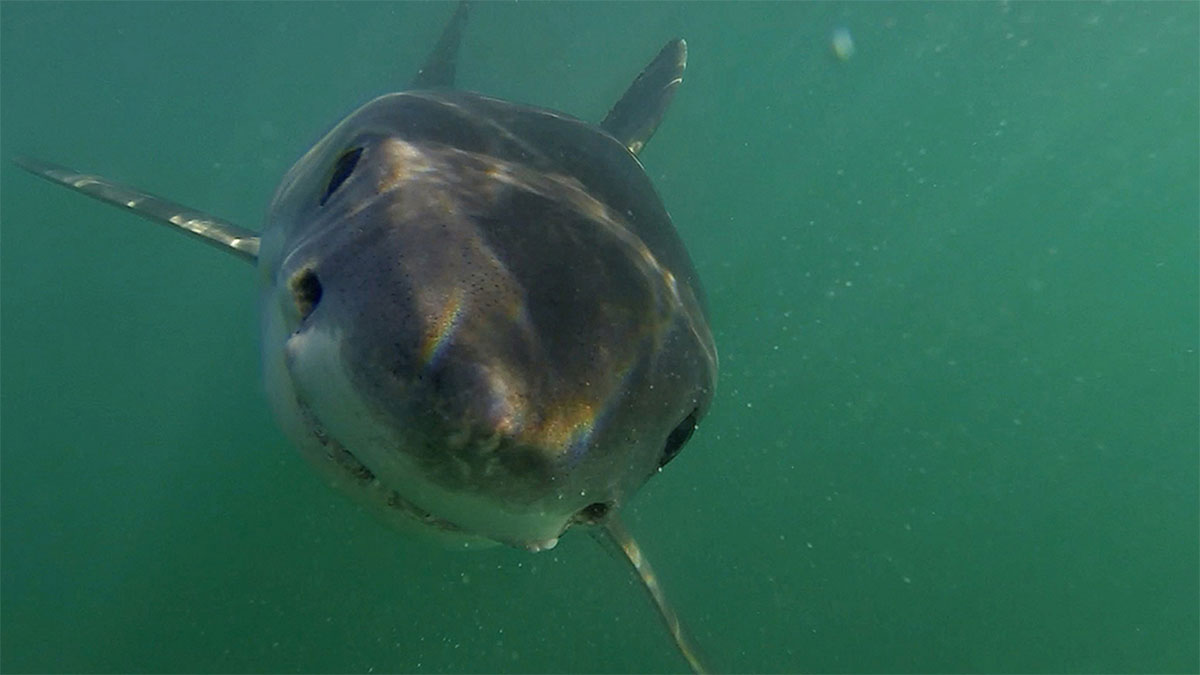 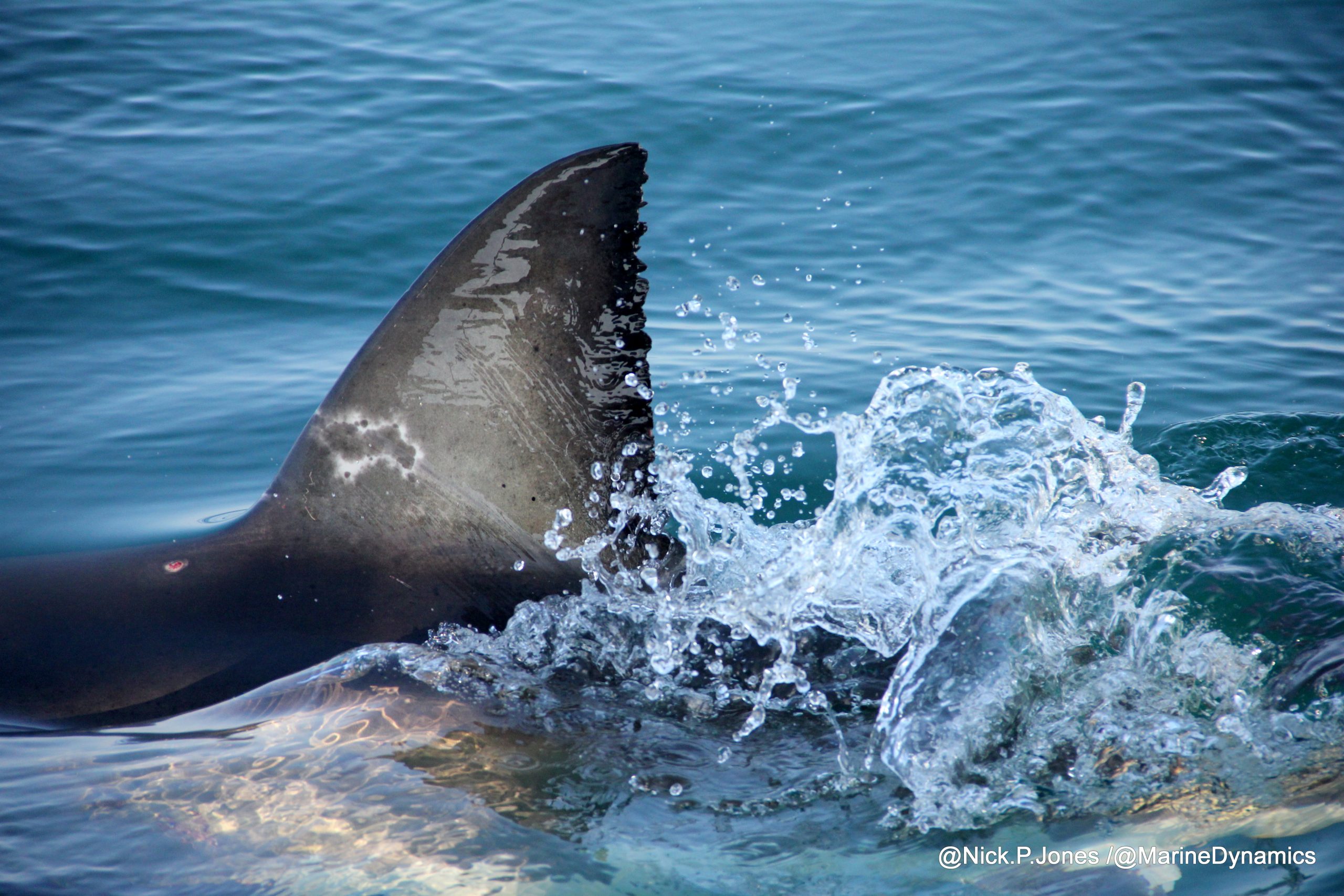 The first step in the process was to get a fin ID of the white sharks we saw while cage diving. Getting the whole fin, in focus, side on to the camera and completely clear of the water would be counted as a Q6. As long as you could see most of the fin and with good focus, or all of the fin but not quite perfect, we'd give a ranking of Q5. Anything less and the photo didn't make the catalog. This shark was a young male we saw in winter months at Dyer Island and he started visiting Dyer Island right around the time I started working there. I called him 8-Ball after the shape of the pigment on his fin. 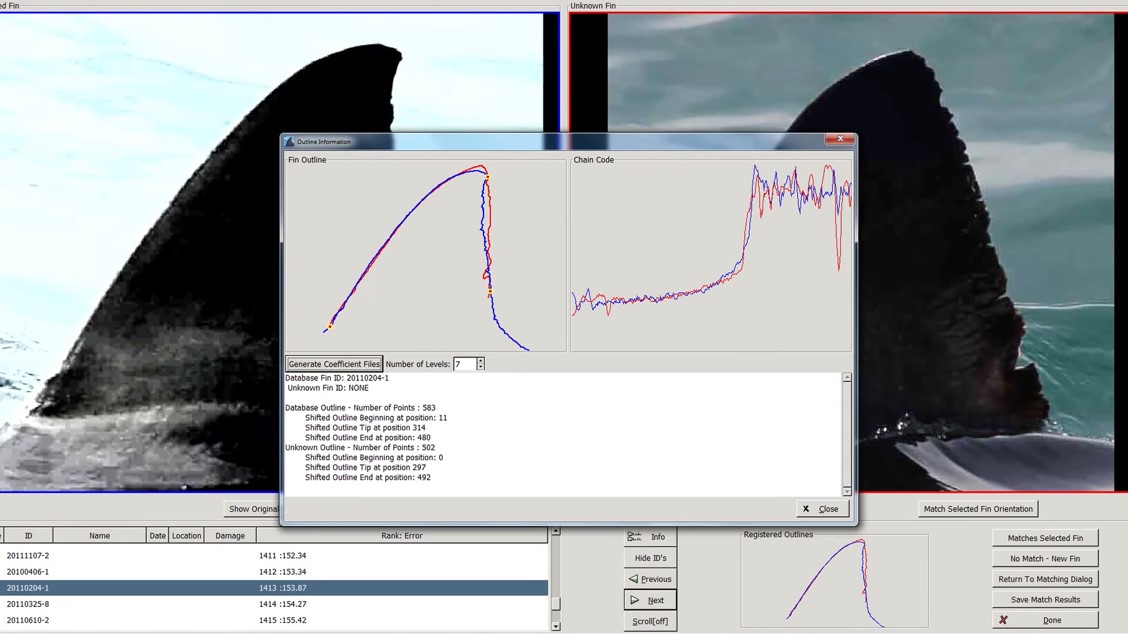 We used the software Darwin to trace and match the fins. This process ranks a new fin ID against all others in the catalog by most likely to match. Then you have to scroll through all of the potential matches (right through to the end of the catalog) before you can count it as a new shark.

It was great we had this catalogue, but as anyone who’s published a paper can attest to, the data processing is just half of the story (OK in this case maybe a bit more than half!).

The data still needed to be appropriately analysed, and there was a paper to be written too. Fortunately, at that time, I was undertaking my Master’s research at the University of Pretoria, in Marthán Bester’s Lab. During this time I’d become great friends with Ryan Reisinger and his family, who put me up whenever I was based at the University. Ryan’s Master’s work had involved mark and recapture of killer whales at Marian Island in the Southern Ocean, using photo ID [3].

I knew Ryan had the specialist skills our team lacked and was the perfect collaborator to bring into our team. Our cataloguing work identified 532 individual white sharks from 1647 trips between the start of 2007 and the end of 2013. Ryan’s models estimated a population of 909 individuals (+/- 100) had been using the region during that time.

Once we had the results, it was time to write up. Ali handled the initial introduction, Michelle and Ed the data collection side of the Methods, Ryan the analysis and results, and I took the lead for the rest of the writing and editing process as well as handling the submission. 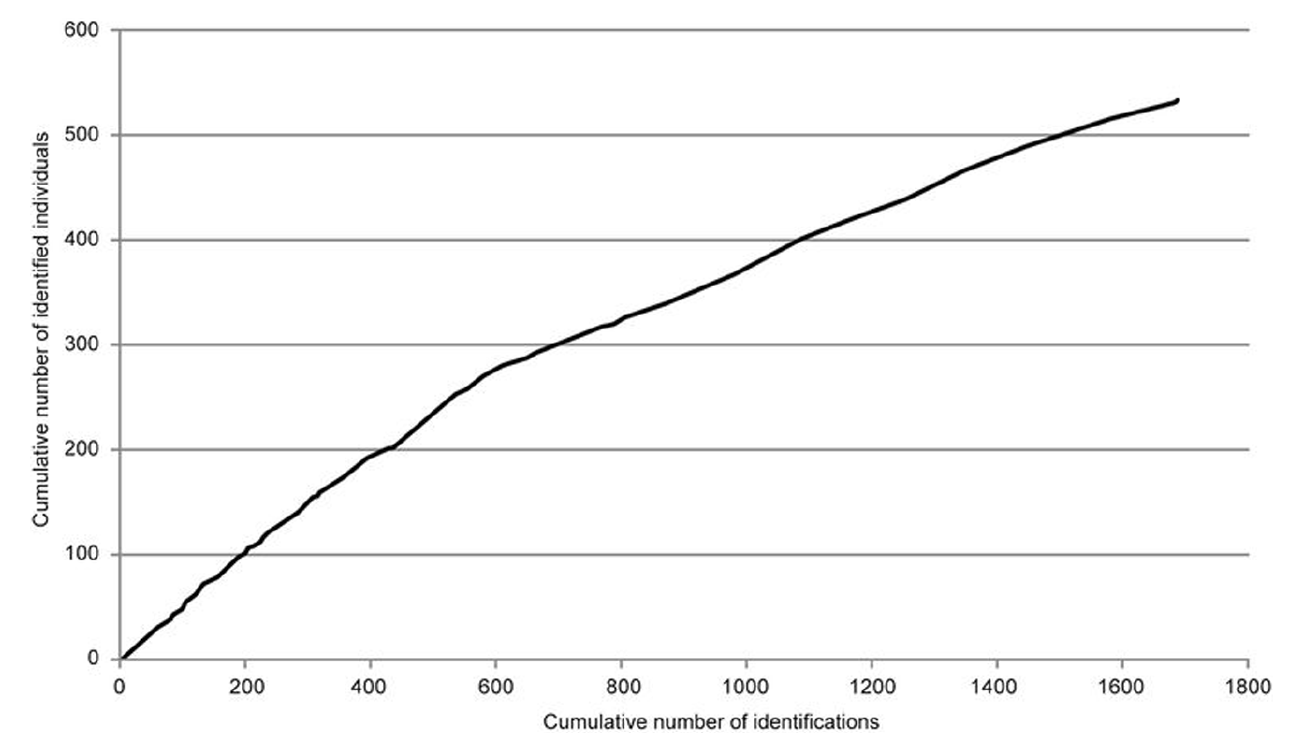 Finally we could count our individual ID's over the years and see how many sharks we'd seen and how often they came to the bay. We counted 532 unique individuals from 1,682 fin ID shots. 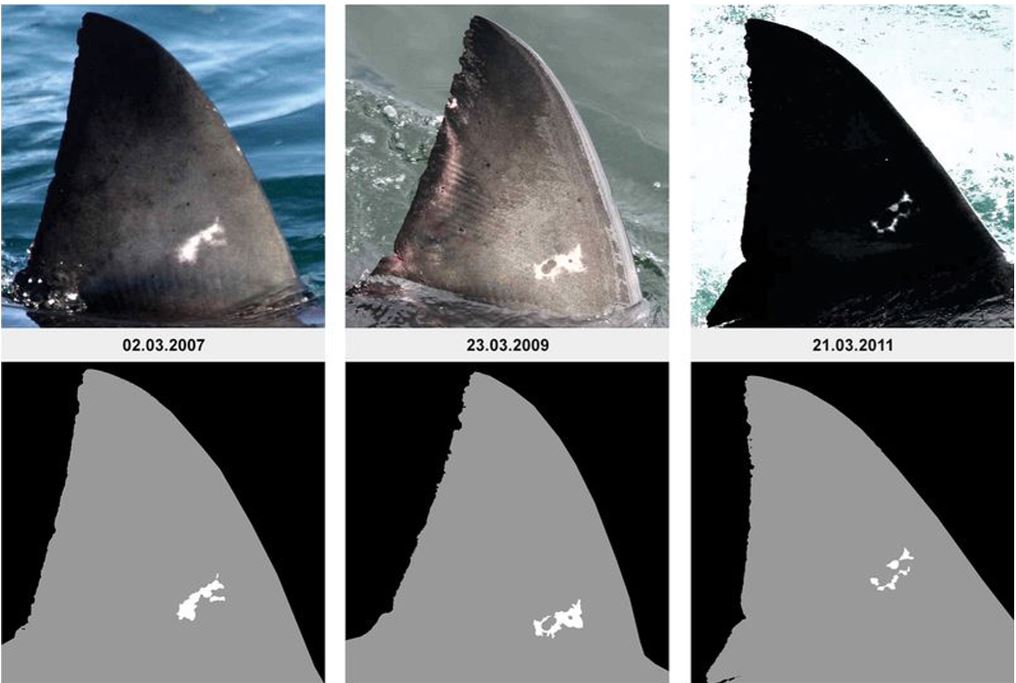 Some sharks were seen multiple times in every year we collected ID's, others were only seen once. Ryan's models were used to account for this and predict how many sharks would have been in the bay in total during those years, an estimated 908 (±100) white sharks. 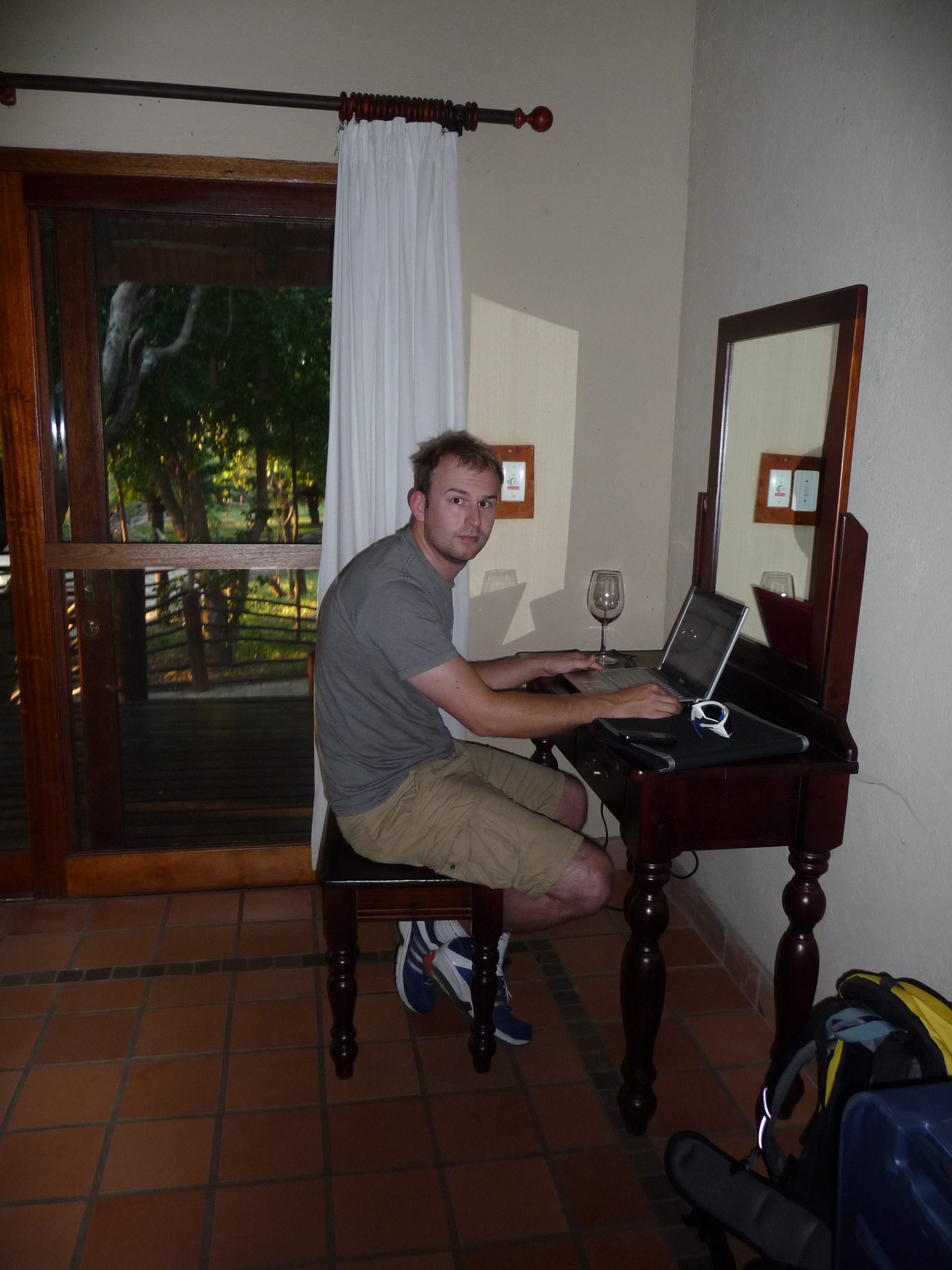 A very unflattering photo of the actual moment I submitted the paper while on holiday with my parents in Kruger National Park.

The Legacy of the Work

This study was the first population estimate of white sharks in South Africa for many years, and the first conducted on live individuals. We showed that while the population appeared healthy and stable in Gansbaai, there was little evidence of continued growth. The conservation status of the species in South Africa as a whole remained on a knife-edge as we’d already identified threats in other regions and countries that could directly impact the sharks we saw in Gansbaai.

We held a press conference at the Two Oceans Aquarium to share our research with the media, the work was featured in numerous news outlets locally and abroad and continues to be well cited. This is my proudest, and I believe my most significant contribution to science to date. At the time, we were three Master’s students, a PhD Candidate and Ed. And we produced a world-class research paper that remains as relevant today as it was the day it was released.

How many sharks did you calculate in total?

There were 532 unique individuals counted by our team. To be counted we had to get a near perfect photo of the sharks fin, it had to be traced into our catalogue using the Darwin software and then checked against all other individuals by eye. If no match was found we could add a new shark to our population.

The calculated number of sharks, i.e. the ‘super population’ of sharks that would have been in Gansbaai over the 5 years but would not have been counted for whatever reason (they had not come to our boat/the fin never got close for the ID shot etc.) came to 908 with a 95% confidence interval of between 808-1008 sharks.

What difference does that make?

Well both the numbers we counted and calculated were considerably larger than from aggregation areas elsewhere in South Africa and abroad. The study confirmed the importance of Gansbaai for the population of white sharks in Southern Africa.

Is it possible you counted the same shark as different individuals?

It’s extremely unlikely, though we used software to help us create the catalogue, a new individual could not be added (or matched) without human input. So this meant Ed and Michelle spent hundreds of hours checking each potential match fin by fin to make 100% sure there was no way a new fin could be paired with any other before counting a new individual.

Fins can change, particularly when an injury occurs. But a combination of the fin tracing, experience of the authors in matching injuries to sharks before and after, and Ed’s keen eye, ensured we could still pair our injured fins.

We were also extremely selective with our fin ID’s so only the best shots got into the catalogue in the first place. We know of several sharks who couldn’t be counted in the 532 because there was no good fin ID of them.